Fourth Sunday after the Epiphany 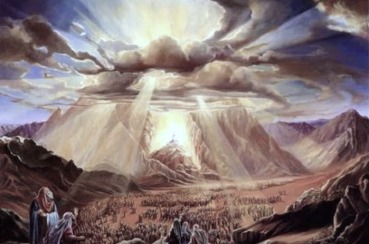 Hearing the Voice of God

Listening to the voice of God may be a challenge for some of us. It certainly was for the Children of Israel. Reading from Deuteronomy:

Moses said: The Lord your God will raise up for you a prophet like me from among your own people; you shall heed such a prophet. This is what you requested of the Lord your God at Horeb on the day of the assembly when you said: “If I hear the voice of the Lord my God any more, or ever again see this great fire, I will die.” Then the Lord replied to me: “They are right in what they have said. I will raise up for them a prophet like you from among their own people; I will put my words in the mouth of the prophet, who shall speak to them everything that I command. Anyone who does not heed the words that the prophet shall speak in my name, I myself will hold accountable. But any prophet who speaks in the name of other gods, or who presumes to speak in my name a word that I have not commanded the prophet to speak—that prophet shall die.”   (Deuteronomy 18:15-20)

Moses was ordained by God to lead his people out of bondage in Egypt into the promised land. Surely God would speak to him and through him. But would God speak to all of Israel? He did so at Horeb, but the people could not bare to hear his voice.

Why was that so? The people explained that if they did they would die. What is remarkable is that God told Moses that they were right in what they said. We read from the Book of Hebrews:

For we know the one who said, “Vengeance is mine, I will repay.” And again, “The Lord will judge his people.” It is a fearful thing to fall into the hands of the living God.   (Hebrews 10:30-31)

Because of their fear of God they did not want to approach him. Thus God would approach them. He gave them a series of prophets, starting with Moses, who would relay God’s word to them. If they would listen to God and obey his decrees, he would bless them. When they disobeyed, they would taste a portion of his vengeance. Unfortunately, the warnings of the prophets were often not heeded.

God’s last prophet was John theBaptist, whom came in the spirit of Elijah. He ushered in God’s last Word to Israel: The Word made flesh. But who would listen to him? Who listens to him today? Before his crucifixion, Jesus stood looking over Jerusalem:

Jerusalem, Jerusalem, the city that kills the prophets and stones those who are sent to it! How often have I desired to gather your children together as a hen gathers her brood under her wings, and you were not willing!   (Matthew 23:37)

For those who have given their heart to the Lord Jesus, the fear factor of hearing God’s voice has been removed. Their sins are remitted by the blood of Jesus. From Ephesians we read:

God, who is rich in mercy, out of the great love with which he loved us even when we were dead through our trespasses, made us alive together with Christ—by grace you have been saved— and raised us up with him and seated us with him in the heavenly places in Christ Jesus, so that in the ages to come he might show the immeasurable riches of his grace in kindness toward us in Christ Jesus.   (Ephesians 2:4-7)

Are we listening to God today? If not, perhaps we are not aware of our heavenly position with Christ. If we do not listen to him, we will surely be listening to the wrong voice. The psalmist wrote:

Those who choose another god multiply their sorrows;
their drink offerings of blood I will not pour out
or take their names upon my lips.   (Psalm 16:4)

How do we listen to God. First, we read his Holy Scripture. God speaks through his written Word. And rather than hiding from him when we sin, we need to confess it. From the Epistle of John:

If we confess our sins, he who is faithful and just will forgive us our sins and cleanse us from all unrighteousness.   (1 John 1:9)

We need to keep an open account with God. He will correct us from time to time, as written in Proverbs:

My child, do not despise the Lord’s discipline
or be weary of his reproof,
for the Lord reproves the one he loves,
as a father the son in whom he delights.   (Proverbs 3:11-12)

When we listen to the voice of God, the enemy will do everything he can to distract us. Jesus said:

Let me hear what God the Lord will speak, for he will speak peace to his people, to his saints; but let them not turn back to folly.   (Psalm 85:8)

We need more than ever the peace of the Lord in our hearts. God is speaking that to us now if we are listening. But to listen to him is to turn away from the folly of this world.

The voice of God speaks to us on our behalf. These are the promise he made to Israel through Moses:

A woman in the crowd raised her voice and said to him, “Blessed is the womb that bore you, and the breasts at which you nursed!” But Jesus said, “Blessed rather are those who hear the word of God and keep it!”   (Luke 11:27-28)

But not all have obeyed the good news;[c] for Isaiah says, “Lord, who has believed our message?” So faith comes from what is heard, and what is heard comes through the word of Christ.   (Romans 10:16-17). 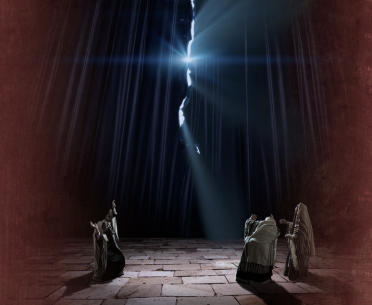 The Veil Was Torn Apart

During this Season of Epiphany we have been looking at various examples of how God manifested his presence and power. Today, we look at the Mount of Transfiguration experience of Peter, James, and John. These disciples had been taught directly by Jesus. They knew him as a great teacher of the Law of Moses. They had witnessed his healings and miracles first hand. They were starting to realize that Jesus was the promised Messiah. But they were not prepared for what was about to take place on the mountain. Reading from Luke:

About eight days after Peter had acknowledged Jesus as the Christ of God, Jesus took with him Peter and John and James, and went up on the mountain to pray. And while he was praying, the appearance of his face changed, and his clothes became dazzling white. Suddenly they saw two men, Moses and Elijah, talking to him. They appeared in glory and were speaking of his departure, which he was about to accomplish at Jerusalem. Now Peter and his companions were weighed down with sleep; but since they had stayed awake, they saw his glory and the two men who stood with him. Just as they were leaving him, Peter said to Jesus, “Master, it is good for us to be here; let us make three dwellings, one for you, one for Moses, and one for Elijah”–not knowing what he said. While he was saying this, a cloud came and overshadowed them; and they were terrified as they entered the cloud. Then from the cloud came a voice that said, “This is my Son, my Chosen; listen to him!”   (Luke 9:28-35)

The disciples saw Jesus in his glorious state, standing with Moses and Elijah. They were overwhelmed.

Moses had gone up to the mountain to talk with God. When he came down the Israelites were not prepared for what they saw:

The Israelites saw the reflected glory 0n the face of Moses. Just a hint of God’s glory could overwhelm the onlooker. Again, from Exodus:

Afterward all the Israelites came near, and he gave them in commandment all that the Lord had spoken with him on Mount Sinai. When Moses had finished speaking with them, he put a veil on his face; but whenever Moses went in before the Lord to speak with him, he would take the veil off, until he came out; and when he came out, and told the Israelites what he had been commanded, the Israelites would see the face of Moses, that the skin of his face was shining; and Moses would put the veil on his face again, until he went in to speak with him.   (Exodus 34:29-35)

God is a holy God and we are sinners. God has had to veil himself so that anyone who has contact with him would not be destroyed. He established a temple arrangement in which the Ark of the Covenant would remain behind a curtain or veil in a room called the “most holy place.” Only the high priest could enter this place. He did it only once a year to offer the atoning sacrifice for the sins of the people.

How do we approach God today? Do we look to God through a veil? The Apostle Paul tells us that is unnecessary:

Since, then, we have such a hope, we act with great boldness, not like Moses, who put a veil over his face to keep the people of Israel from gazing at the end of the glory that was being set aside. But their minds were hardened. Indeed, to this very day, when they hear the reading of the old covenant, that same veil is still there, since only in Christ is it set aside.   (2 Corinthians 3:12-14)

Even today, preachers and teachers speak about going behind a veil to get in touch with God. There is no veil. The veil has been torn apart. From the Gospel of Matthew:

Then Jesus cried again with a loud voice and breathed his last. At that moment the curtain of the temple was torn in two, from top to bottom. The earth shook, and the rocks were split. The tombs also were opened, and many bodies of the saints who had fallen asleep were raised.   (Matthew 27:50-52)

Now the Lord is the Spirit, and where the Spirit of the Lord is, there is freedom. And all of us, with unveiled faces, seeing the glory of the Lord as though reflected in a mirror, are being transformed into the same image from one degree of glory to another; for this comes from the Lord, the Spirit.   (2 Corinthians 3:17-18)

We become who or what we worship. Do we look upon glory or do we celebrate the flesh? But what about the high priest idea? We are not high priests. No we are not, but we have a high priest standing in for us. From the Book of Hebrews:

For we do not have a high priest who is unable to sympathize with our weaknesses, but we have one who in every respect has been tested as we are, yet without sin. Let us therefore approach the throne of grace with boldness, so that we may receive mercy and find grace to help in time of need.   (Hebrews 4:15-16)

Are we ready to approach the throne of grace without any restrictions? Again, from Hebrews:

Therefore, my friends, since we have confidence to enter the sanctuary by the blood of Jesus, by the new and living way that he opened for us through the curtain (that is, through his flesh), and since we have a great priest over the house of God, et us approach with a true heart in full assurance of faith, with our hearts sprinkled clean from an evil conscience and our bodies washed with pure water. Let us hold fast to the confession of our hope without wavering, for he who has promised is faithful.   (Hebrews 10:19-23)

God is calling us. How will we respond? In fear or in joy?