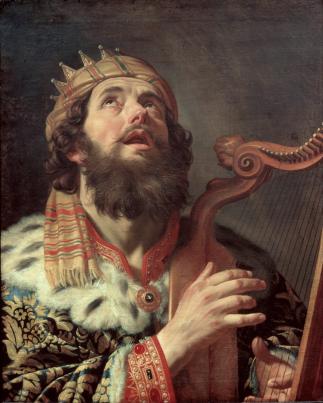 Building the House of David

King David wanted to do something for God. He wanted to build him a house. In today’s Old Testament reading we find him telling this to the prophet Nathan:

When the king was settled in his house, and the Lord had given him rest from all his enemies around him, the king said to the prophet Nathan, “See now, I am living in a house of cedar, but the ark of God stays in a tent.” Nathan said to the king, “Go, do all that you have in mind; for the Lord is with you.”   (2 Samuel 7:1-3)

David was probably not prepared for God’s response to his plan. God had to correct what Nathan had said:

But that same night the word of the Lord came to Nathan: Go and tell my servant David: Thus says the Lord: Are you the one to build me a house to live in? I have not lived in a house since the day I brought up the people of Israel from Egypt to this day, but I have been moving about in a tent and a tabernacle. Wherever I have moved about among all the people of Israel, did I ever speak a word with any of the tribal leaders of Israel, whom I commanded to shepherd my people Israel, saying, “Why have you not built me a house of cedar?” Now therefore thus you shall say to my servant David: Thus says the Lord of hosts: I took you from the pasture, from following the sheep to be prince over my people Israel; and I have been with you wherever you went, and have cut off all your enemies from before you; and I will make for you a great name, like the name of the great ones of the earth. And I will appoint a place for my people Israel and will plant them, so that they may live in their own place, and be disturbed no more; and evildoers shall afflict them no more, as formerly, from the time that I appointed judges over my people Israel; and I will give you rest from all your enemies. Moreover the Lord declares to you that the Lord will make you a house. Your house and your kingdom shall be made sure forever before me; your throne shall be established forever.   (2 Samuel 7:4-11, 16)

The psalmist celebrated this word from God:

Your love, O Lord, for ever will I sing;
from age to age my mouth will proclaim your faithfulness.

For I am persuaded that your love is established for ever;
you have set your faithfulness firmly in the heavens.

“I have made a covenant with my chosen one;
I have sworn an oath to David my servant:

‘I will establish your line for ever,
and preserve your throne for all generations.'”   (Psalm 89:1-4)

God told David that he would build him a house and not the other way around. The house that God would build for David was an everlasting kingdom. No other kingdoms on the earth have been everlasting. How would God would accomplish this? Reading from today’s Gospel:

In the sixth month the angel Gabriel was sent by God to a town in Galilee called Nazareth, to a virgin engaged to a man whose name was Joseph, of the house of David. The virgin’s name was Mary. And he came to her and said, “Greetings, favored one! The Lord is with you.” But she was much perplexed by his words and pondered what sort of greeting this might be. The angel said to her, “Do not be afraid, Mary, for you have found favor with God. And now, you will conceive in your womb and bear a son, and you will name him Jesus. He will be great, and will be called the Son of the Most High, and the Lord God will give to him the throne of his ancestor David. He will reign over the house of Jacob forever, and of his kingdom there will be no end.” Mary said to the angel, “How can this be, since I am a virgin?” The angel said to her, “The Holy Spirit will come upon you, and the power of the Most High will overshadow you; therefore the child to be born will be holy; he will be called Son of God.   (Luke 1:26-35)

“The kingdom of the world has become the kingdom of our Lord and of his Christ, and he shall reign for ever and ever.”   (Revelation 11:15)

Have we ever wondered what we could do for God to please him? The good news of the Gospel is that we have already pleased him by believing in his Son, our Lord Jesus Christ. It is not what we can do for God, but what God will do for us, if we will allow him.

God was going to do an extraordinary miracle through Mary, which had never been done before. She could not have fully understood what God was promising, but she was willing to believe the angel and gave herself entirely to God by saying:

Every good endowment and every perfect gift is from above, coming down from the Father of lights with whom there is no variation or shadow due to change. Of his own will he brought us forth by the word of truth that we should be a kind of first fruits of his creatures.   (James 1:17-18)

Perhaps we do not believe that we are worthy of his gifts? The Apostle wrote:

But your sins were washed away. You were made holy. You were made right with God. All of this was done in the name of the Lord Jesus Christ. It was also done by the Spirit of our God.   (1 Corinthians 6:11)

God wants to bless us. He wants to do extraordinary things through us. He has great things in store for us. The Apostle Paul wrote:

But God, who is rich in mercy, out of the great love with which he loved us, even when we were dead through our trespasses, made us alive together with Christ (by grace you have been saved), and raised us up with him, and made us sit with him in the heavenly places in Christ Jesus, that in the coming ages he might show the immeasurable riches of his grace in kindness toward us in Christ Jesus. For by grace you have been saved through faith; and this is not your own doing, it is the gift of God — not because of works, lest any man should boast. For we are his workmanship, created in Christ Jesus for good works, which God prepared beforehand, that we should walk in them.   (Ephesians 2:4-10)

Will we be able to say, like Mary: “Be it unto me according to thy word? We have a place in his lasting kingdom. He has created us for that place and he wants to bless us into that place. Are we ready? Advent is about getting ready