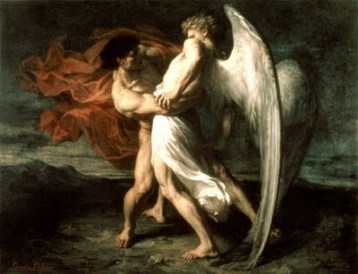 Jacob was on his way home, getting ready to face his brotherEsau. In today’s Gospel reading we pick up on the story:

The same night Jacob got up and took his two wives, his two maids, and his eleven children, and crossed the ford of the Jabbok. He took them and sent them across the stream, and likewise everything that he had. Jacob was left alone; and a man wrestled with him until daybreak. When the man saw that he did not prevail against Jacob, he struck him on the hip socket; and Jacob’s hip was put out of joint as he wrestled with him. Then he said, “Let me go, for the day is breaking.” But Jacob said, “I will not let you go, unless you bless me.” So he said to him, “What is your name?” And he said, “Jacob.” Then the man said, “You shall no longer be called Jacob, but Israel, for you have striven with God and with humans, and have prevailed.” Then Jacob asked him, “Please tell me your name.” But he said, “Why is it that you ask my name?” And there he blessed him. So Jacob called the place Peniel, saying, “For I have seen God face to face, and yet my life is preserved.” The sun rose upon him as he passed Penuel, limping because of his hip.   (Genesis 32:22-31)

Jacob’s wrestling was a physical one with God. He was just getting to know God on a more spiritual level. We remember Job from the Old Testament. His wrestling was a more spirirual one. Job stood head and shoulders above his contemporaries in terms of righteousness. Yet Job was under a severe test. He had lost everything that he had owned and even his body was inflicted with loathsome sores. Job did never cursed God as Satan had said he would. But he could not understand why he was experiencing such pain and loss. God’s answer was a surprise:

And the Lord said to Job:

“Shall a faultfinder contend with the Almighty?
Anyone who argues with God must respond.”

Then Job answered the Lord:

Have we ever been faultfinders with God? Life does not always seem fair. We may wonder why God has allowed us to undergo certain tribulations or persecutions, although Jesus warned this disciples that they would come.

Ultimately,Job achieved a breakthrough with God:

Then Job answered the Lord:

“I know that you can do all things,
and that no purpose of yours can be thwarted.
‘Who is this that hides counsel without knowledge?’
Therefore I have uttered what I did not understand,
things too wonderful for me, which I did not know.
‘Hear, and I will speak;
I will question you, and you declare to me.’
I had heard of you by the hearing of the ear,
but now my eye sees you;
therefore I despise myself,
and repent in dust and ashes.”   (Job 42:1-6)

Our wrestling with God will change us. It will not leave us in the same condition before the encounter. Jacob’s name was changed to Israel. His hip was put out of joint. But he was able to meet his brother Esau, and receive his forgiveness. What is more telling is how he settled in Cannan:

Jacob came safely to the city of Shechem, which is in the land of Canaan, on his way from Paddan-aram; and he camped before the city. And from the sons of Hamor, Shechem’s father, he bought for one hundred pieces of money the plot of land on which he had pitched his tent. There he erected an altar and called it El-Elohe-Israel.   (Genesis 33:18-20).

For Jacob, now Israel, the God of Abraham and Isaac had become the God of Israel.

Where do we stand with God today? He is the creator of the universe and the God and Father of us all. But is he our God? If we do not give up, if we keep on wrestling with God, he will bless us. Jacob and Job did not give up  They came to know God on a much deeper level. That is where God wants to meet us. He loves us so much.

“For God so loved the world that he gave his only Son, so that everyone who believes in him may not perish but may have eternal life.

“Indeed, God did not send the Son into the world to condemn the world, but in order that the world might be saved through him.   (John 3:16-17)

In today’s Gospel reading we have the feeding of the five thousand:

Jesus withdrew in a boat to a deserted place by himself. But when the crowds heard it, they followed him on foot from the towns. When he went ashore, he saw a great crowd; and he had compassion for them and cured their sick. When it was evening, the disciples came to him and said, “This is a deserted place, and the hour is now late; send the crowds away so that they may go into the villages and buy food for themselves.” Jesus said to them, “They need not go away; you give them something to eat.” They replied, “We have nothing here but five loaves and two fish.” And he said, “Bring them here to me.” Then he ordered the crowds to sit down on the grass. Taking the five loaves and the two fish, he looked up to heaven, and blessed and broke the loaves, and gave them to the disciples, and the disciples gave them to the crowds. And all ate and were filled; and they took up what was left over of the broken pieces, twelve baskets full. And those who ate were about five thousand men, besides women and children.   (Matthew 14:13-21)

Notice that Jesus asked his disciples to do something that was impossible for them. He said: “They need not go away; you give them something to eat.” When God calls us to do something we know it is of God when it is beyond our means to do it. God called Moses to do the impossible. He asked him to go and lead the children of Israel into the Promised Land. Moses was afraid that no one would believe:

“But suppose they do not believe me or listen to me, but say, ‘The Lord did not appear to you.’” The Lord said to him, “What is that in your hand?” He said, “A staff.” And he said, “Throw it on the ground.” So he threw the staff on the ground, and it became a snake; and Moses drew back from it. Then the Lord said to Moses, “Reach out your hand, and seize it by the tail”—so he reached out his hand and grasped it, and it became a staff in his hand — “so that they may believe that the Lord, the God of their ancestors, the God of Abraham, the God of Isaac, and the God of Jacob, has appeared to you.”   (Exodus 4:1-5)

To Moses his staff was just a rod, to God it was an instrument for miracles. If we wish to do ministry we must begin somewhere. God asks us to begin with whatever we find in our hands. Say, for instance, you are a carpenter. You want to do something in the name of Jesus for the sake of the Gospel. Perhaps you could help build houses for the poor and homeless. This could be monumental task.Habitat for Humanity had a very small and humble beginning. But look how God has blessed this ministry.

The Prophet Zechariah had a vision:

The angel who talked with me came again, and wakened me, as one is wakened from sleep. He said to me, “What do you see?” And I said, “I see a lampstand all of gold, with a bowl on the top of it; there are seven lamps on it, with seven lips on each of the lamps that are on the top of it. And by it there are two olive trees, one on the right of the bowl and the other on its left.” I said to the angel who talked with me, “What are these, my lord?” Then the angel who talked with me answered me, “Do you not know what these are?” I said, “No, my lord.” He said to me, “This is the word of the Lord to Zerubbabel: Not by might, nor by power, but by my spirit, says the Lord of hosts. What are you, O great mountain? Before Zerubbabel you shall become a plain; and he shall bring out the top stone amid shouts of ‘Grace, grace to it!

Moreover the word of the Lord came to me, saying, “The hands of Zerubbabel have laid the foundation of this house; his hands shall also complete it. Then you will know that the Lord of hosts has sent me to you. For whoever has despised the day of small things shall rejoice, and shall see the plummet in the hand of Zerubbabel.   (Zechariah 4:1-10)

We should not despise small beginnings. Not by might, nor by power, but by my spirit, says the Lord of hosts.

All of us have limitations, but God is not limited. When we work in partnership with him, when we put our trust in him, when we believe what he is telling us, when we exercise our faith, all things are possible.

He fulfills the desire of those who fear him;
he hears their cry and helps them.

The Lord preserves all those who love him,
but he destroys all the wicked.

Let us begin any ministry with praise to God. Let us call upon him for help and support. Let us listen carefully to what he tells us todo. Jesus gave his disciples instructions. When they followed them five thousand men, besides women and children, were fed.