Saint Michael and All Angels 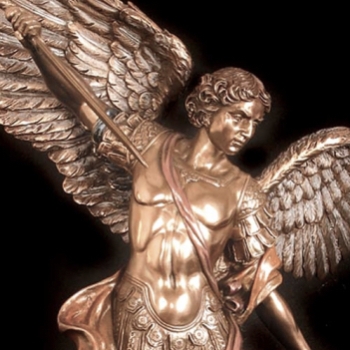 We are in a battle on this earth. The battle has been ongoing for a long time but it did not begin here. The battle began in heaven:

We are in an epic battle and we must understand who our real enemy is. The Apostle Paul writes:

For we do not wrestle against flesh and blood, but against principalities, against powers, against the rulers of the darkness of this age, against spiritual hosts of wickedness in the heavenly places.   (Ephesians 6:12-13)

We are fighting the forces of evil. Evil is real. We cannot defeat it by our own strength. Fortunately, we are not in this battle alone. God is with us. His holy angels are on our side. The archangel Michael and his angels are still fighting for us. Today, we honor Michael and all the holy angels.

Yet, it is important for us to understand that we do not worship angles but the One true God who has made us all. Again, the Apostle Paul writes:

Do not let anyone disqualify you, insisting on self-abasement and worship of angels, dwelling on visions, puffed up without cause by a human way of thinking,   (Colossians 2:18)

Angels are not to be worshipped. They are to be honored. Let us show our appreciation for the warring angels through our prayers. The psalmist wrote:

The Lord has set his throne in heaven,
and his kingship has dominion over all.

Bless the Lord, you angels of his,
you mighty ones who do his bidding,
and hearken to the voice of his word.

We can give thanks to God for our guardian angels, but we should not pray to them, or to anyone else, but God alone.

The holy angels are fighting against evil and we must also fight evil. We have two primary weapons to do so. In Revelation we read:

Then I heard a loud voice in heaven, proclaiming,

“Now have come the salvation and the power
and the kingdom of our God
and the authority of his Messiah,

for the accuser of our comrades has been thrown down,
who accuses them day and night before our God.

But they have conquered him by the blood of the Lamb
and by the word of their testimony,

We have the blood of Jesus which covers our sins. This gives us access to the throne of God.  Through faith in the blood of Jesus we appropriate the righteousness of God in Christ. Thus we have authority over the devil. That is important to understand because prayer is our primary weapon against evil. We can bind evil with our prayers because we have authority over evil by the blood of the Lamb, our Lord Jesus Christ. Our faith must be complimented by our testimony, however, if our prayer is to be effective.

If we claim the blood of Jesus then we must boldly tell others. There is often a price to pay for doing so. We cannot cling to the things of this world. We may even have to face death, as in many parts of the world today, by proclaiming our faith.

We are in a battle. The same battle as the angels. It is a spiritual battle. Our weapon is prayer. But let us not forget that the power 0f our prayer is dependent upon holy living. The Book of James states:

Confess your sins to one another, and pray for one another, so that you may be healed. The prayer of the righteous is powerful and effective.   (James 5:16)

We may also have to wage a war within ourselves. Paul wrote:

Indeed, we live as human beings, but we do not wage war according to human standards; for the weapons of our warfare are not merely human, but they have divine power to destroy strongholds. We destroy arguments and every proud obstacle raised up against the knowledge of God, and we take every thought captive to obey Christ.   (2 Corinthians 10:3-5)

But praise be to God we are not alone. God is with us. And his warring are on our side. Let us be bold as the Archangel Michael and not shrink back from the face of evil in this world. Amen.

One response to “Saint Michael and All Angels”