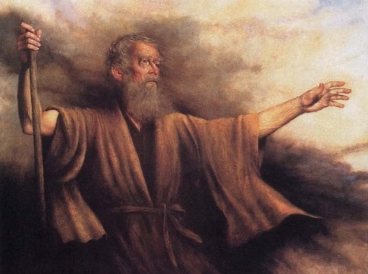 Track 1: Humility before the Lord

Pharaoh of Egypt was threatened by the growing Hebrew population. He decreed that every male child born to the Hebrews be thrown into the Nile. Today we read how God protected the baby Moses:

Now a man from the house of Levi went and married a Levite woman. The woman conceived and bore a son; and when she saw that he was a fine baby, she hid him three months. When she could hide him no longer she got a papyrus basket for him, and plastered it with bitumen and pitch; she put the child in it and placed it among the reeds on the bank of the river. His sister stood at a distance, to see what would happen to him.

The daughter of Pharaoh came down to bathe at the river, while her attendants walked beside the river. She saw the basket among the reeds and sent her maid to bring it. When she opened it, she saw the child. He was crying, and she took pity on him, “This must be one of the Hebrews’ children,” she said. Then his sister said to Pharaoh’s daughter, “Shall I go and get you a nurse from the Hebrew women to nurse the child for you?” Pharaoh’s daughter said to her, “Yes.” So the girl went and called the child’s mother. Pharaoh’s daughter said to her, “Take this child and nurse it for me, and I will give you your wages.” So the woman took the child and nursed it. When the child grew up, she brought him to Pharaoh’s daughter, and she took him as her son. She named him Moses, “because,” she said, “I drew him out of the water.”   (Exodus 2:1-10)

God has a plan for Moses. He would be used iby God n an extraordinary way to rescue his people from slavery in Egypt and lead them to the land promised to the Patriarch Abraham. Moses performed great signs and wonders, under God’s hand, to make this happen. But his leadership position was also shared with his sister Miriam and his brother Aaron.

Miriam and Aaron became jealous of Moses and decided to challenge his leadership and authority:

Now the man Moses was very humble, more so than anyone else on the face of the earth. Suddenly the Lord said to Moses, Aaron, and Miriam, “Come out, you three, to the tent of meeting.So the three of them came out. Then the Lord came down in a pillar of cloud, and stood at the entrance of the tent, and called Aaron and Miriam; and they both came forward. And he said, “Hear my words:

When there are prophets among you,
I the Lord make myself known to them in visions;
I speak to them in dreams.
Not so with my servant Moses;
he is entrusted with all my house.
With him I speak face to face— clearly, not in riddles;
and he beholds the form of the Lord.   (Numbers 12:3-8)

What the Lord said about Moses was only true for him and no one else. Moses spoke to God face to face. Yet Moses was more about the mission that God gave him to do than about his position with God. God chose him for the position because because God had given him the mission.

God has assigned each one of us positions and assignments to fulfill in the establishment of his kingdom. The Apostle Paul wrote:

For by the grace given to me I say to everyone among you not to think of yourself more highly than you ought to think, but to think with sober judgment, each according to the measure of faith that God has assigned. For as in one body we have many members, and not all the members have the same function, so we, who are many, are one body in Christ, and individually we are members one of another. We have gifts that differ according to the grace given to us: prophecy, in proportion to faith; ministry, in ministering; the teacher, in teaching; the exhorter, in exhortation; the giver, in generosity; the leader, in diligence; the compassionate, in cheerfulness.   (Romans 12:3-8)

How do we respond to the call on our lives? Do we take pride in the assignment which God has given us, expecting great privileges and recognition? Do we become jealous of one another’s roles? Jesus said:

You know that among the Gentiles those whom they recognize as their rulers lord it over them, and their great ones are tyrants over them. But it is not so among you; but whoever wishes to become great among you must be your servant, and whoever wishes to be first among you must be slave of all. For the Son of Man came not to be served but to serve, and to give his life a ransom for many.   (Mark 10:42-45)

Whoever we are and whatever we do, we are no more than the servants of God. If we are to do the tasks which God asks us to do, we must keep things in perspective. And what is that perspective? Reading from the Prophet Micah:

He has told you, O mortal, what is good; and what does the Lord require of you but to do justice, and to love kindness, and to walk humbly with your God?   (Micah 6:8)

The only way we can approach God is with a humble and grateful heart. I order for us to do the work which God has given we must remain in fellowship with him. On our own we can do nothing.

Track 2: The Question Everyone Must Answer

In today’s Gospel reading, Jesus asks his disciples the all important question:

When Jesus came into the district of Caesarea Philippi, he asked his disciples, “Who do people say that the Son of Man is?” And they said, “Some say John the Baptist, but others Elijah, and still others Jeremiah or one of the prophets.” He said to them, “But who do you say that I am?” Simon Peter answered, “You are the Messiah, the Son of the living God.” And Jesus answered him, “Blessed are you, Simon son of Jonah! For flesh and blood has not revealed this to you, but my Father in heaven. And I tell you, you are Peter, and on this rock I will build my church, and the gates of Hades will not prevail against it.   (Matthew 16:13-18)

With divine help, Peter recognized who Jesus was. But Jesus did not build the Church on Peter’s recognition alone .Rather, he built the Church on his testimony as well. Believing is not enough. From the Book of James we read:

You believe that God is one; you do well. Even the demons believe—and shudder.   (James 2:19)

Our faith is important. The Apostle Paul tells us that we are saved by grace through faith. The grace comes when God gives us the faith. But what do we do with that faith.

“The word is near you,

on our lips and in your heart”

(that is, the word of faith that we proclaim);  if you confess with your lips that Jesus is Lord and believe in your heart that God raised him from the dead, you will be saved. For one believes with the heart and so is justified, and one confesses with the mouth and so is saved.    (Romans 10:8-10)

Listen to me, my people,
and give heed to me, my nation;
for a teaching will go out from me,
and my justice for a light to the peoples.
I will bring near my deliverance swiftly,
my salvation has gone out
and my arms will rule the peoples;
the coastlands wait for me,
and for my arm they hope.
Lift up your eyes to the heavens,
and look at the earth beneath;
for the heavens will vanish like smoke,
the earth will wear out like a garment,
and those who live on it will die like gnats;
but my salvation will be forever,
and my deliverance will never be ended.

Today, who is Jesus to us? Is he Lord of all? Is her our Lord? Is he our savior? What do we tell others about Jesus? The world as we know it will soon be coming to the end. But we will live on because our testimony will last an eternity