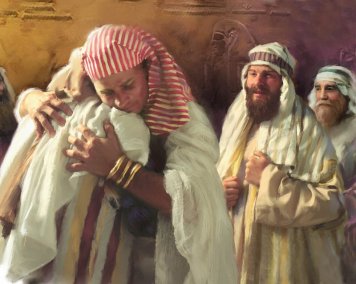 We remember how the brothers of Joseph sold him into slavery in Egypt. They were jealous of him, to the point of killing him. Their hatred toward Joseph was so strong. Their evil intentions, however, led to a greater good. God’s intentions are greater than ours. His ways are higher than ours. Today we read about one of greatest examples of how God won the victory over human deceit and hatred.

Because of a great famine the brothers of Joseph were sent to Egypt to buy food by their father Israel. Joseph, because of his faithfulness and obedience to God had risen to be the second in command of all Egypt, second only to the Pharaoh. The brothers, who did not recognize Joseph, were totally unaware that it was Joseph to whom they were talking. Reading from Genesis:

Then Joseph said to his brothers, “Come closer to me.” And they came closer. He said, “I am your brother, Joseph, whom you sold into Egypt. And now do not be distressed, or angry with yourselves, because you sold me here; for God sent me before you to preserve life. For the famine has been in the land these two years; and there are five more years in which there will be neither plowing nor harvest. God sent me before you to preserve for you a remnant on earth, and to keep alive for you many survivors. So it was not you who sent me here, but God; he has made me a father to Pharaoh, and lord of all his house and ruler over all the land of Egypt. Hurry and go up to my father and say to him, ‘Thus says your son Joseph, God has made me lord of all Egypt; come down to me, do not delay. You shall settle in the land of Goshen, and you shall be near me, you and your children and your children’s children, as well as your flocks, your herds, and all that you have. I will provide for you there—since there are five more years of famine to come — so that you and your household, and all that you have, will not come to poverty.’ And now your eyes and the eyes of my brother Benjamin see that it is my own mouth that speaks to you. You must tell my father how greatly I am honored in Egypt, and all that you have seen. Hurry and bring my father down here.” Then he fell upon his brother Benjamin’s neck and wept, while Benjamin wept upon his neck. And he kissed all his brothers and wept upon them; and after that his brothers talked with him.   (Genesis 45:4-15)

We can make terrible decisions in life. We can make terrible mistakes. But God can bring good out of our sinful acts when we call upon him. The grace of God, working through Joseph, brought about a reconciliation between the brothers. Joseph was able to forgive his brothers and share God’s love for them. The psalmist wrote:

Oh, how good and pleasant it is,
when brethren live together in unity!

It is like fine oil upon the head
that runs down upon the beard,

Upon the beard of Aaron,
and runs down upon the collar of his robe.

It is like the dew of Hermon
that falls upon the hills of Zion.

So if anyone is in Christ, there is a new creation: everything old has passed away; see, everything has become new! All this is from God, who reconciled us to himself through Christ, and has given us the ministry of reconciliation; that is, in Christ God was reconciling the world to himself, not counting their trespasses against them, and entrusting the message of reconciliation to us.   (2 Corinthians 5:17-18)

We need reconciliation between our family, friends, and others. But first we must be reconciled to God. Paul continues:

In Christ God was reconciling the world to himself, not counting their trespasses against them, and entrusting the message of reconciliation to us. So we are ambassadors for Christ, since God is making his appeal through us; we entreat you on behalf of Christ, be reconciled to God. For our sake he made him to be sin who knew no sin, so that in him we might become the righteousness of God.   (2 Corinthians 5:19-21) 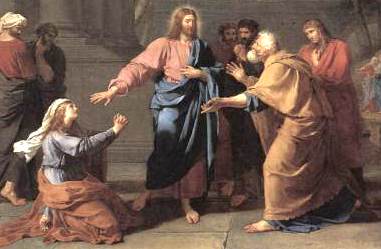 Track 2: The Mercy of God

In today’s Gospel we have an encounter of Jesus with a Canaanite woman. Cannane was the land where God drove out the pagan kingdoms because he had promised the land to Abraham. Israel had a long history of dealing with the Canaanites who were constantly threatening their very existence. Reading from Matthews:

Jesus left that place and went away to the district of Tyre and Sidon. Just then a Canaanite woman from that region came out and started shouting, “Have mercy on me, Lord, Son of David; my daughter is tormented by a demon.” But he did not answer her at all. And his disciples came and urged him, saying, “Send her away, for she keeps shouting after us.” He answered, “I was sent only to the lost sheep of the house of Israel.” But she came and knelt before him, saying, “Lord, help me.” He answered, “It is not fair to take the children’s food and throw it to the dogs.” She said, “Yes, Lord, yet even the dogs eat the crumbs that fall from their masters’ table.” Then Jesus answered her, “Woman, great is your faith! Let it be done for you as you wish.” And her daughter was healed instantly.   (Matthew 15:21-28)

The response of Jesus was not unexpected by the Canaanite woman.. She knew that she was an outsider to Israel and hated by many of them. What is interesting about her, though, is that she recognized the power and authority of Jesus, which many Israelites did not. And she was willing, even at the risk of ridicule, or worst, to ask Jesus for help. Her love for her daughter and her hope that Jesus would cure her, helped her to prevail. But how could she fail? Jesus honored her deep faith. After all, no matter who we are, are righteous only by faith.

You may remember another time when Jesus was moved by a person’s faith. This man was also an outsider as well. He was a tax collector named Zacchaeus. After his encounter with Jesus, he was willing to give up half of his possessions to the poor and to pay back four times those whom he may have defrauded.

Then Jesus said to him, “Today salvation has come to this house, because he too is a son of Abraham. For the Son of Man came to seek out and to save the lost.”   (Luke 19;9-10)

Anyone who  responds to Jesus by faith is a child of Abraham and a child of the promise. Being an actual descendent of Abraham by birth alone is not enough. t

Thus says the Lord:
Maintain justice, and do what is right,

for soon my salvation will come,
and my deliverance be revealed.

And the foreigners who join themselves to the Lord,
to minister to him, to love the name of the Lord,
and to be his servants,

all who keep the sabbath, and do not profane it,
and hold fast my covenant–

these I will bring to my holy mountain,
and make them joyful in my house of prayer;

their burnt offerings and their sacrifices
will be accepted on my altar;

The key words are “all people.” The Apostle Paul wrote:

For God has imprisoned all in disobedience so that he may be merciful to all.   (Romans 11:32)

How do we respond to his goodness and mercy? Do we respond like the Canaanite woman and Zacchaeus with faith? We cannot do so without recognizing who Jesus is and acknowledging his authority. The Canaanite woman was willing to beg. She knew that she was in desperate need and that only Jesus could help her. How desperate are we for healing and deliverance? How desperate are we for a new life in Christ? God is seeking us. Are we seeking him?